What a blessing it has been to be so embraced by fellow like minded people in this new world I have entered.   This was such a blind path that I embarked on over seven months ago, I had no clue how things would turn out.  I just knew that I needed to tell people what I had discovered about these precious kids in orphanages all over the world that have been tossed away like trash.  I needed to try to spread awareness about child abuse and how rampant it really is in our society.  To really make people think about how they can help make a difference and stop it.   I haven’t even had a chance to write about some of the other things that are on my heart, because to be honest, they are so heavy and quite hard to absorb.   This said, I have set a goal that I must just force myself to get it out there within the next few posts, so more to come on that later.

Back to the first thought here…

I have been graciously invited into an incredible group of folks who all have a passion for the children.  Some have adopted, some are in the process now, some are advocating and fundraising for families in need, and some are just there to be supportive to said families in any way they can be.  I am telling you, these people are amazing!

A few weeks ago my husband and I had the pleasure of attending an intimate group gathering at a church in Salem, OR.  This would be my first time ever really meeting any of these people and even though I had had many chats via Facebook or email with some of them, I just felt as if I were meeting pen pals or celebrities even.  I was so nervous!   Yet I knew that God had placed this path and these people in my life for a reason.

On our way there my husband jokingly says we should have a “safe word” in case I end up feeling really uncomfortable.  We had just watched New Girl on TV the night before and they had a safe word, “apricots”.  So we laughingly agree on apricots.

We arrive and there isn’t really anyone there besides a few cars.  We walk in and right away we are welcomed by Kim (who invited us).  From there on it was a whirlwind of constant good conversation with people.  I was so excited to finally meet Becki who I instantly hit it off with as well.  I knew I belonged the moment Becki and I were chatting and I confessed Grant and I had established a safe word and before I got the chance to go any farther she busts out laughing and says “Oh my gosh, do you guys watch New Girl?”  and in unison we both said, “Apricots!”   The laughter was uncontrollable!  Especially when I told her it really was apricots! 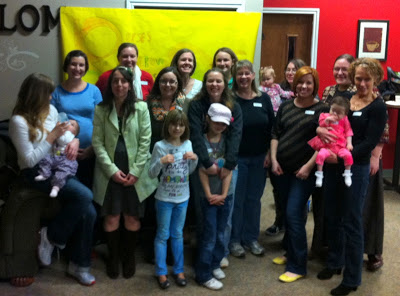 Everyone only got blurry cell phone pictures. That is all we got too! Most of the kids are missing from this pic too, they were too busy playing.

What a wonderful time we had.  Good food, good people and the biggest treat was getting to see the kids playing together so carefree.  Many of these children came from adoption, and some from the very orphanages we all so desperately want to get children out of halfway across the world.  One sweet little angel was 4 year old Sophia.  At 4 years old, she weighed only 10 pounds.   This is not a rare occurrence, sadly in Eastern Europe this child’s physical condition is one that is seen far too often.  Severely malnourished and neglected for years in a crib with little human contact.  Sophia has been home for two months and has already gained 5 pounds!!!   She is still super tiny and is the size of an infant, but that is major progress!   That goes to show that it isn’t her “condition” that makes her so tiny.  Which is what so much of the staff at these orphanages claims to believe.   If a child has down syndrome, autism, cerebral palsy or anything else the starvation/undernourishment of these babies is claimed not to be the issue, but the child’s condition.  They don’t see an issue with what or how much they feed the kids.  I know that not all orphanages are like this, but too many are.  My prayers continue to go out to Sophia and her family and all others in similar situations out there.  More on Sophia in my next post so stay tuned!!

We also had the privilege to meet a sweet couple and their darling baby girl.  Darrell and Haley are newly in the process of adopting a sweet little love named Copeland.  He is cute as can be, but is waiting for a family to call his own.   Darrell and Haley have a long road ahead of them and they need all the support they can get.  Please consider going to their blog page to follow them on their journey  http://thebuhmanbunch.blogspot.com. 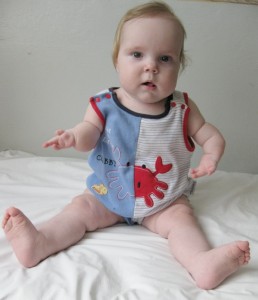 I guess that is all for now!  Take care all!

I appreciate your comments! Cancel reply